Phew! What a fantastic day. Last Saturday, September 3rd, we held our first ever board game design jam in Pulse College Dublin, and we called it Build A Board Game. You may remember we talked about this in a previous post and on the podcast. We had about 36 people turn up on the day, and spend about 6 hours designing games using components and a theme we provided. 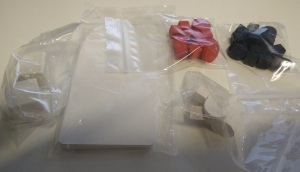 We may have been a bit generous with the components, but then again maybe we weren’t! Every team was given 10 wooden cubes each in black, white and red, 3 wooden discs in black, white and red, 20 blank cards, 2 blank dice and 2 sheets of cardboard. We felt this would give people plenty of options on what they wanted to build, and how they would build it.

The theme, meanwhile, was ‘rise’. We didn’t want to go with something like ‘fantasy’ or ‘zombies’, as it would have been too easy, and those themes have been done to death! I do wonder if we used our best theme in our first event, but only time will tell!

We had two prizes up for grabs. First was for best game, and second was for best use of theme. We really wanted the prizes to reflect what The Crafty Players is all about, so we contacted some of our favourite breweries, who agreed to help us out, and picked out some award winning games. Both the prizes were exactly the same: 6 beers from Wicklow Wolf Brewery, 6 beers from DOT Brew, as well as a copy of Codenames, winner of the Spiel Des Jahres, and Isle of Skye, winner of the Kennerspiel Des Jahres. I can’t tell you how hard it was to have those beers sitting in my house and not drink them! The urge to rip open a copy of Isle of Skye and pop all those components was also strong, especially as we’ve never played it!

What kind of games came out of it?

Why not let the designers tell you themselves! Of the 12 teams, we got 9 written elevator pitches back. Here are the games designed by everyone, and in no particular order how they pitched them! 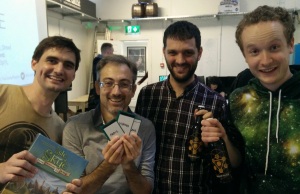 Winner of Best Use of Theme

It’s a race around Europe in your hot air balloons. Manage your ballast to get the jump on your opponents. Massive points await the most savvy balloonist. Have you got what it takes or are you full of hot air? 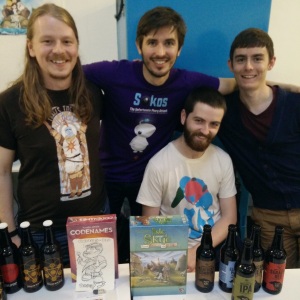 You and your friends are trapped in a mine. Race to escape; the winner the first one out! Plan your escape through a maze of tunnels, but beware! Dynamite and earthquakes change the shape of the board as you play.

You’re throwing a party to try to raise yourself up the social ladder. Only problem in your way is your darn neighbour Chet! He’s throwing his own party on the same night. Use your cards to tempt party goers to your apartment with promises of music, food and cool people. Hamper Chet’s efforts and hope he doesn’t get too many people into his party!

Raise the stakes with this exciting game of dexterity and skill! Build the tallest highrise and force your opponent to topple their own tower.

Smoke is in the air and blood is on the streets. Guards and subversives battle and citizens seek shelter. Can you manipulate the guards, subversives and citizens to meet your secret objective before the town explodes?

You, good sir, are a whiskey magnate. You must build your Empire of Alcohol, gaining reputation and the respect of your peers. But beware!! There are unscrupulous businessmen who poison their competitors wares! Or perhaps, you yourself may drop a sneaky dram of unmentionables in your neighbours barrel…

Flour Power is a 204 player game about rising up t be the best baker in town. In the first phase of the game you collect ingredients to make the best looking, tasting or valued cake. In the second phase you compete against one another to turn customers into regulars. Enough regulars nets you a business deal. The first player with 3 business deals wins!

In Rise to Flour, you are a presidential candidate in the United Cakes of Hamerica. The elections are coming up so you have to compete against the cream of the crop to gain power. Use the media, money and political weight to get the States on your side. The steaks are high – and medium rare! Good luck,

Be the 1st to reach the top of Mt Everest! Battle your opponents and the elements as you rise toward the summit. In this dice and card driven board game pushing back your opponents is just as important as advancing your own position. Make the most of your limited supply of anchors to ensure you don’t fall too far when they push back.

This was our first time organising a game jam. Everybody had a great time, and the feedback was overwhelmingly positive. However things weren’t perfect. We made mistakes, or didn’t think things through fully. Whenever we do our next game jam (I’m looking at you April 2017!), some of the things we’ll change include:

We already knew this, but the community here, and the people who attended the game jam, were amazing, and as I said overwhelmingly positive and supportive. They really made the day what it was, and we sincerely thank them for making it a success.

We would like to extend a sincere thanks to Basil and Pulse College Dublin for hosting us on Saturday, and providing a venue for our event. Another big shout out to Robin for advising us, sharing his experiences of previous game jams and helping us make this one as good as possible. Wicklow Wolf Brewery and DOT Brew were both incredibly generous by providing beer for prizes on the day. Finally, thanks to our partners, for being patient in the build up and during the organisation, and for letting us out to play for a full day.

Have you ever been to a game jam? Would you like to try one? Thoughts on components and restrictions? Let us know in the comments below.

5 thoughts on “Reflections on Build A Board Game”