It’s that time of year, Christmas, holidays, season of joy and generosity! That magical few days of the year when we go and spend time with family and loved ones, sharing our stories, dreams and hopes. Sometimes though, you don’t want to do any of that and instead just play some games. So here we are, sharing our 12 Games of Christmas, 6 games each which Paddy and Emmet feel could be brought out with the family at any time, that are easy enough to pick up, that everyone can enjoy. One or two might surprise, one or two probably won’t, but read on and see what you think!

We were originally going to do these lists in a podcast, but illness, busy work schedules and the inevitable overloading of pre-Christmas events have made recording a podcast nearly impossible. So here we are in written format! 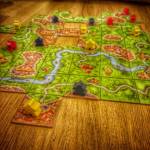 I love Carcassonne, it’s a great game that can be whatever you want it to be. If can be a simple, laid back experience where you build a map together, or it can be a hard fought battle with spiteful moves and blocking opponents, or it can be somewhere in between. For those of you who don’t know, Carcassonne is considered one of the modern classics of board games, where each player on their turn takes a tile and places it in a map, trying to build towns, roads and cloisters. You have little wooden people to place on the map to claim things, which let you score them for points. I think it would appeal to families as well, because it’s so similar to a jigsaw puzzle, but one leaden with strategy and a little competition.

A game of bluffing, like poker without the numbers and card counting. Each player has a hand of four cards, three roses or skull. Everybody puts one card face down, and then play begins. On your turn you have two options: place down another card or bet. You’re betting how many flowers you can find among all the cards placed, including your own. So there’s always the doubt about whether you can make someone go higher, or scare them out of the betting so you can win. There is player elimination, which isn’t great, but you can definitely get sucked into the tension of watching the others play the game.

I’ve written about Rhino Hero before, and said it’s the game that can be used to answer most board game related questions, and once again it comes up trumps. Gather round as your family gingerly build up a literal house of cards, carefully stacking and placing wall and roof tiles, moving a rather rotund superhero rhino meeple between the floors. Laugh out loud as it all comes crashing down, and demands for one more try, one more rematch fill the air. Smile smugly to yourself, knowing that this simple £6 yellow box of delight has brought your family so much joy.

Another game I’ve written about before, Quadropolis is a very simple city building game, that has plenty of tough decisions. In the basic game every player starts with a 5×5 grid, and a number of arrows going from 1-5. You place this arrows around a central board, pointing at a row or column. If you use arrow 1 you take the first tile, and you have to place it in row or column 1 in your personal board. If you use arrow 2, you take the second tile and place it in your second row or column. The tiles represent houses, harbours, parks, factories, all of which score differently. It’s fairly straightforward, but it’s a really interesting puzzle as you try to figure out what you want and when to take it. You also need to be flexible as you adapt to the changing state of the board. A good game that’s easy enough for older kids and teenagers to understand.

I have to admit, when I was first given Qwirkle as a gift, I was a bit skeptical. But boy, this game of coloured tiles with shapes is an incredible game that anyone can pick up and play in a matter of minutes. Each player has a number of tiles in front of them, and on your turn, take one tile, place it in the middle of the table, adding to an existing line for which you gain points and then draw another tile. Finish a line (i.e. a line with all 6 different colours in the same shape, or the same colour with the 6 different shapes) and you score bonus points. These simple rules lead to agonising decisions and head scratching and good humoured banter. Add the fifth tile to a row, and look on in despair as the next player finishes it off. You just gifted them bonus points! Sit in sweaty anticipation, looking at the row of 5 you can complete, waiting, praying, hoping that no one else can finish it off, but then they do and you howl with frustration as the table laughs. 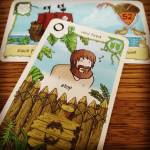 If you read my previous post on Friday you might ask yourself a simple question: why a solo game? Simple. On Christmas day a lot of my family will go and watch TV shows and soaps that I have no interest in. So I often find myself on my own or sitting there watching shows I’m not interested in. So I’m going to take a small solo game with me for times like this. In Friday, you are Friday, Robinson Crusoe’s companion. Your objective is to help Robinson survive as long as possible, so that he can fight off the pirates and escape the island. I’ve written a blog post about Friday before. You’re trying to add the right cards to your deck to help Robinson survive, and remove the cards that hinder you. But at the same time having too few cards in your deck means that your deck cycles often and the more you cycle your deck, the older Robinson gets, the more age cards you acquire, which have big negatives. There’s fantastic tension and engagement as you try to balance everything.

So there you have it! The six games that I will be bringing in my bag down to share with my family over the holidays. What do you think of the list? Will any of these games make it into your luggage? Let us know in the comments below, or on Twitter, Instagram or on our Facebook page!