Frustration. For weeks that was the predominant emotion. Maybe weeks is a bit too long, but for sure it was frustration. You see, I’d decided to enter the GenCan’t Roll and Write contest. A game design contest that with a one month deadline, that needed to involve standard dice (the roll bit), that involved writing on paper (eh…the write part), and that MUST include a solo mode. All three things made me uncomfortable as a designer. Generally I don’t like dice. I’ve very little experience with roll and write games. I’ve more experience with solo games, but have never designed one, and any ambitions I’ve had to design one usually end with exasperation as I try to find the balance between replayability (generally through random events, unpredictable outcomes etc.) and making the game about skill, not luck (generally though reducing randomness, avoiding hugely unpredictable outcomes).

So there I am, trying to figure out what I want to make for this game. I have an initial idea, about trying to house refugees in a camp, making sure they have enough food, housing and so on. A tough subject, and to be honest, something I’m not very knowledgeable about. Would it invite criticism if it was inaccurate, insensitive or if my ignorance just shone through? I did play with the idea of changing the theme, perhaps have it as people settling a new town in some generic fantasy setting. I toyed with the concept, drew a few quick prototypes on paper, but found it didn’t work. Having the player shade in tiny squares to represent the walls of the buildings they were constructing was a bit more fine detail work than was ideal.  Not to mention trying to draw people within those walls!

Consider that idea abandoned. Followed by a few fallow days of not having a clue what to do.

Then an old reliable reared its head. What if I made a game about making beer? Genius! So I got to work on my first prototype. The game involved trying to cover negative scores in two different beer recipes, to achieve the maximum score. There were four different tracks: pale malt, chocolate malt, hops and yeast. A little like the scoring system in Coffee Roaster, you were trying to get each track to a certain point. You’d roll dice, and depending on the ingredient you were using, you would either use the face value of the dice, the value divided by two, or the value divided by three. You only had a certain number of turns before you had to stop. If you stopped on a certain ingredient too soon, you would score negative points, if you didn’t stop soon enough, you’d have too many ingredients and score negative points. There was a sweet spot in each line where you were trying to land.

I excitedly drew up my prototype, and played. It was…fine. There was a little bit of push your luck, mixed with an element of timing, as you had certain abilities that would let you roll three dice and choose two. When do you use them? Early or late? It presented some interesting choices. But it was too random, rolling two dice and trying to hit a sweet spot wasn’t fun, and scoring felt beyond the player’s control. So I decided to add some abilities, equipment and other fun things that let you score points, or modify scores, instead of rolling a dice on a given turn. This made the game worse!! It was boring, the player had more choices, but the choices were almost always better than rolling a dice. No interesting choices, no tension, and it was too easy. 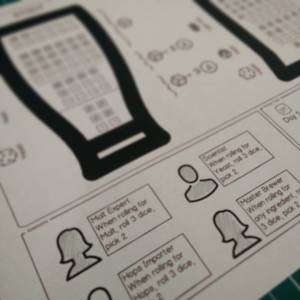 What followed was a pretty quick few iterations of different ideas and designs, changing different things along the way. I can’t tell you exactly what I was thinking or hoping to achieve. As I said, frustration was the main emotion of the time, and this was peak frustration time. Every time I played a prototype I found it unfulfilling. Was it me? Maybe these games just aren’t for me? Or is my game just bad? I didn’t know. I often didn’t know how to fix or improve aspects, so I often ended up ripping out whole sections, and re-working different aspects of the game. Time was running out, and I nearly gave up. I had a concept, a theme that fit, but I just couldn’t make it work.

In the end I did submit a game, a few hours before the deadline closed. It was my latest iteration. A previous version was a bit too easy and the scoring was confusing (as an aside, don’t make a scoring mechanism that allows things to multiply other scores, it creates huge variables in scores). I emailed my entry after a 12 hour work day, on a Saturday. I hadn’t tested the final version, but damned if I wasn’t going to enter.

The next day I was browsing Twitter, and I saw that there has been 81 entries. The frustration ebbed away, and there was something else: a sense of pride, of accomplishment. I had made something, it had been entered, and there it was, on the official list of submissions. I may not win (I’m aiming to finish above 81st) but looking back, it was quite the learning process.

81 entries in the #GenCantRnW contest. Incredible diversity in theme & mechanisms among them. THANK YOU to all our contestants! pic.twitter.com/IuW2TX098D

I want to share with you what I made, but the competition guidelines say that there should be nothing on the game itself that identifies who designed it. So for those reasons, I’m not going to share it today. When the winners are announced, I’m going to make it available as a print and play, so keep an eye out for that in the next few weeks.

3 thoughts on “A Roll and Write Experience”